How effective is forward-looking sonar at flagging up shoals and obstacles on the seabed? This shows the Echo scan

Would you like to be able to spot an obstacle before your boat hits it? Of course you would, and so would every other sailor in the world. Looking ahead is the Achilles’ heel of the conventional echo sounder, which can only tell you the depth of the water in which you are already floating. If you wait until the sounder reads zero, it’s too late. That’s where forward-looking sonar comes in.

Admittedly, the conventional sounder can tell you a lot, and in recent years plotters have started to display not only current depth, but also history via their fishfinder screens. It’s a fair bet that if the depth is steadily decreasing, the time will soon come to change course. But this approach only works in gently shoaling water: abrupt changes in depth could spell disaster.

The traditional approach to looking ahead has always been to do so before you take your boat anywhere near a potential hazard. We do it all the time, using the chart and calling it passage planning. A good survey and a precise position has been the key to keeping boats off the rocks for years, but there are times when this isn’t an option. Some places are still poorly charted, and even in our well-surveyed UK waters there are moving shoals which defy the efforts of hydrographers and harbour buoyage.

One option is to jump in the dinghy with a leadline or sounding pole and carry our your own mini-survey beforehand. But if you’re nosing up a river and simply want an early warning of a shoal, or are nervous of finding the right spot to anchor in a rocky loch, wouldn’t it be nice if your echo sounder gave the depth ahead of the boat?

For years, the undisputed king of the niche market of forward-looking sonar has been Ringwood-based Echopilot. Various iterations of their forward-looking technology have sold all over the world, and their only historical competitor disappeared some time ago.ing hazards. 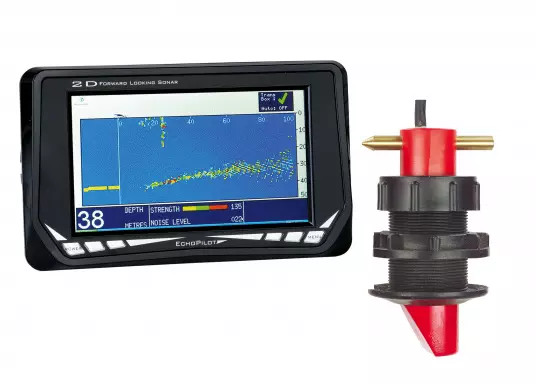 The only unit tested with a dedicated display, the FLS 2D comes with a choice of transducers. The standard transducer is sold as suitable for smaller boats, has plastic encapsulation and uses a 45mm through-hull fitting. The ‘Professional’ transducer is a much heavier unit of bronze, costing an extra £170 and using a 60mm through-hull. Installation is simple – fit the transducer, plug it and the power cable into the back of the display and you’re done.

To display the information, Echopilot uses a screen showing a cross-section of the water ahead of the boat. On this are plotted the echoes received by the transducer, using colours graded from blue to red to show the strength of the echo (red being the stronger). By default, the unit is set to choose a range automatically, but the user can override this.

The user interface is not immediately intuitive, but once the unit is set up the most you are likely to need is to change the range, achieved simply enough using the ‘Up’ and ‘Down’ softkeys. There is an auto setting, which changes the range based on the depth, but in difficult conditions the manual setting is helpful.

On the water, we initially struggled to make sense of the display, but with practice the manner in which the data is shown and colour-coded to indicate the strength of the echo allows a significant level of interpretation from the user. For example, a mooring chain or stake will give a vertical line of strong, red returns with some weaker echoes either side. The red shows that you should pay attention despite there being relatively few data points. Soft mud, on the other hand, gives a scattering of weaker echoes as the sounder struggles to find the bottom, so the truth is likely to be a middle value.

We tested the range of the sounder by looking at a solid concrete wall. The wall was clearly visible at ranges just over 100m, which was the width of the channel in which we were working. Smaller targets such as mooring chains were harder to acquire, with the range typically less than 10m before we could say with confidence that the object was there. At this kind of range the narrow width of the transducer beam becomes obvious, so the bow needs to be held steadily on the target. 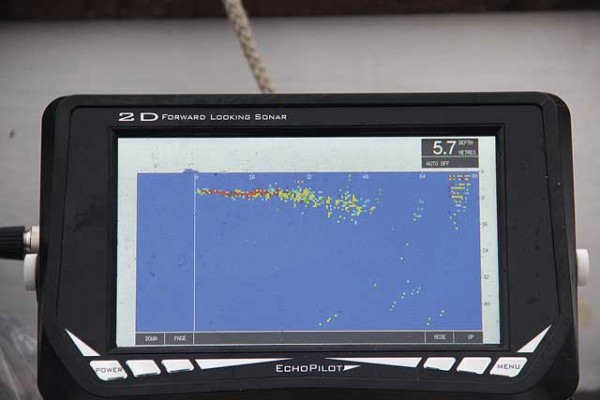 The seabed slopes down to the right, ending at a solid wall at 75m

In soft, shallow mud, the FLS 2D would become confused when in auto mode owing to some echoes being apparently very deep, requiring the range setting manually. This removed most of the spurious results and made the display useful once more, although the depths it recorded were clearly far too high.

Switching to the professional transducer resulted in a cleaner signal, but surprisingly a shorter range at just over 80m. The beam also appeared narrower, so on a small boat where the heading is not necessarily constant, the standard transducer is perhaps a better choice. 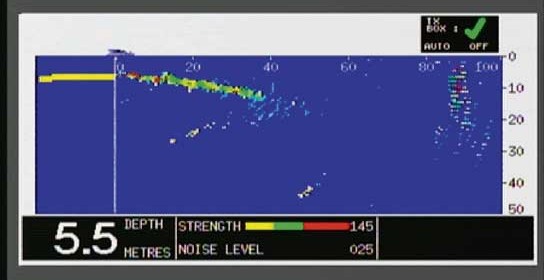 Solid piling, visible at 90m on our range test

In operation, the Platinum engine is similar to the FLS 2D, with the data displayed in the same way. We used the composite video output, but it would pay to use S-video if possible to take advantage of its improved resolution.

Rocks at 32m. The scattering from the irregular shapes makes the return weaker, but there is clearly an obstacle

The transducer is identical in appearance to the Professional transducer for the FLS 2D so, perhaps unsurprisingly, our results were similar. Our range test picked up the wall at about 90m and, like the FLS 2D, it tended to show spurious depths in soft, shallow channels. It was, however, quicker to get back to normal once the boat moved out of the difficult area. We found it harder to pick up mooring chains and narrow objects with the Platinum engine, perhaps due to a narrower beamwidth from the transducer and the tendency of a small boat to yaw. It detected the multi-faceted rocks of some sea defences, albeit with a fairly scattered plot. 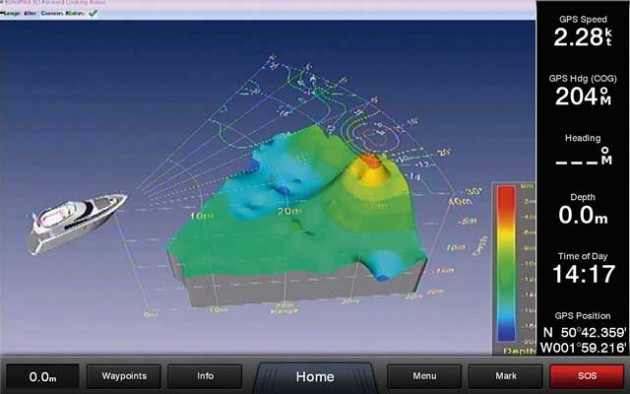 A channel mark’s chain, appearing 30m away as a peak in the midst of deeper water

Echopilot’s flagship model, the FLS 3D, takes a different approach to the 2D products. By using two hefty 75mm through-hull units, each of which contains two angled transducers, the sounder can combine the data to display a 60° sector ahead of the boat.

The amount of data from four transducers would produce a confusing mess if displayed with no further processing, so Echopilot have included a computer in the system to render a surface which best fits the data, and output the video. As a result the system comprises three stages: the transducers, the transducer interface and the computer. From the computer, you can output VGA or DVI to a screen, or go through a converter for composite or S-video.

Like the 2D models, the picture is colour-coded to aid spotting the difference between shallow and deep water. This makes for a very intuitive picture, but a user needs to bear in mind that the surface displayed is similar to that which would be made if you were to drop a blanket over the seabed –spikes are smoothed into curved peaks and vertical walls become steep slopes.

On the water, the display is very easy to read, and we found it good for seeing continuous features such as channel edges. Our range test yielded a shorter range than the 2D sounders, with the wall ahead convincingly visible from about 35m. I suspect this may be due to there being insufficient data points for rendering until you are closer to the obstacle, while the 2D products show the data for the user to interpret. 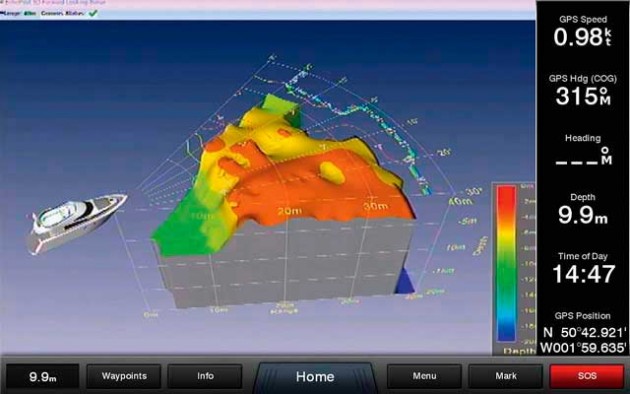 Approaching a steep wall at about 15m. Water appears to exist beyond the wall

Another oddity when approaching the wall was that the sounder showed a depth of water continuing beyond it – not a problem, but something that takes getting used to.

The FLS 3D is primarily sold to larger boats, so our test in a narrow, shallow channel was perhaps unfair. Nevertheless, variations in depth consistent with the channel edge were visible, and had a shorter range than 40m been available would have been clearer. Heading down the edge of a deepwater channel, the edge was clearly defined and navigation mark chains appeared as steep peaks, suggesting that this would be a valuable tool for nosing up a river.