Charging LFP or adding a Alternator 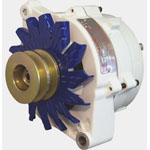 You can see in the table above that the 300 Amp Hour battery can accept a charge at up to 750 Amps but the recommended continuous value is 150 Amps or less.  Note that different battery brands have different rates
Charge Voltage
As you can see in the table above the recommended charge voltage is 14.0 – 14.4 Volts    All alternators will not be able to get the battery to that voltage until the battery is nearly full. When it does get to the full voltage the Alternator nees to hold 14.2 volts for 30min to 1 hr after that it must return to its float level  or depending on the  BMS (Battery Management System) may want  to shut off the charge to the battery..
Now the above is a general rule and its what should happen IF this happens EVERY day  but if it held the charge voltage for say 4 hours once a week  on average  over a year, then this in my opinion would be fine,
So If this is how you run your boat then you will not have to change the alternator regulator, Now some Regulators can be adjusted and other cant.
What happens when the battery gets full?
when the battery getgets full say 14.2 v held for 1 hr  then the BMS will want to turn the charging OFF, One way to achieve that is to interrupt the connection between the alternator and the lithium battery.  In this case there MUST BE  to be another conventional battery connected otherwise voltage spicks will occur, usually this is a start battery, for the alternator to charge. You cant disconnect an alternator’s output while it is running because with nowhere for the power to go its internal voltage would spike soar and may destroy the diodes.
Another way to achieve the same result is to have the BMS turn off the alternator regulator. This is normally only possible with an externally regulated alternator.  When its turned off the alternator isn’t available to charge any other batteries, such as a starting battery.
Ways to limit the load on the alternator
If you have a monster alternator then it may not need limiting.  That would be the kind of heavy duty truck alternator that is designed to run at high output all day.  For any other alternator it would be wise to consider some kind of limiting to prevent it from self destructing when charging Lithium Batteries at high output for an extended time. this is only needed if your alternators output is OVER 80 amps
Alternators that have an external regulator with alternator temperature sensing offer the first and easiest way to limit the current.  When the alternator gets too hot the regulator dials it down a bit to keep it within the allowed temperature.  The latest version of the Wakespeed ws500   or the Balmar MC-614-H regulator offers a continuously adjustable output to keep the alternator within temperature.  the wakespeed WS-500 regulator unit has this current limiting feature inbuilt and is the best  option.
Or another way to limit  alternators will need some additional external limiting device.  The Victron 12/1200 BMS has a built in feature that limits the alternator to a pre-determined output up to 100 Amps.  It works by putting a fuse of the desired limit in the BMS.  If you want to limit the alternator to 80 Amps you put in an 80 Amp fuse.  As the fuse nears its rated capacity it begins to heat up and its resistance changes.  The BMS recognizes that and reduces the current accordingly.   Using this device requires you to have an alternate battery for the alternator to charge.  This 12/1200 BMS can be used as a current limiting device even if it isnt being used as the BMS that controls the batteries.
Another high tech device used to limit the alternator is the Victron Buck Boost DC DC Converter.  This is especially appropriate for other systems with high tech alternators.  The Buck Boost DC DC converter has a vibration sensor to turn it on automatically when the engine is running.  It takes the input voltage and changes it to whatever voltage is required by the Lithium Battery, and in the process limits it to the programmed value, up to a maximum of 50 Amps.  With this you can use a 24 volt alternator to charge a 12 volt battery or vice versa
Basic Circuit diagram 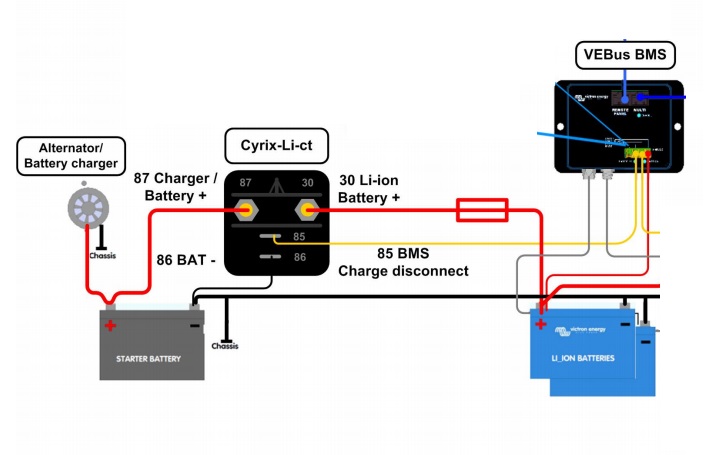 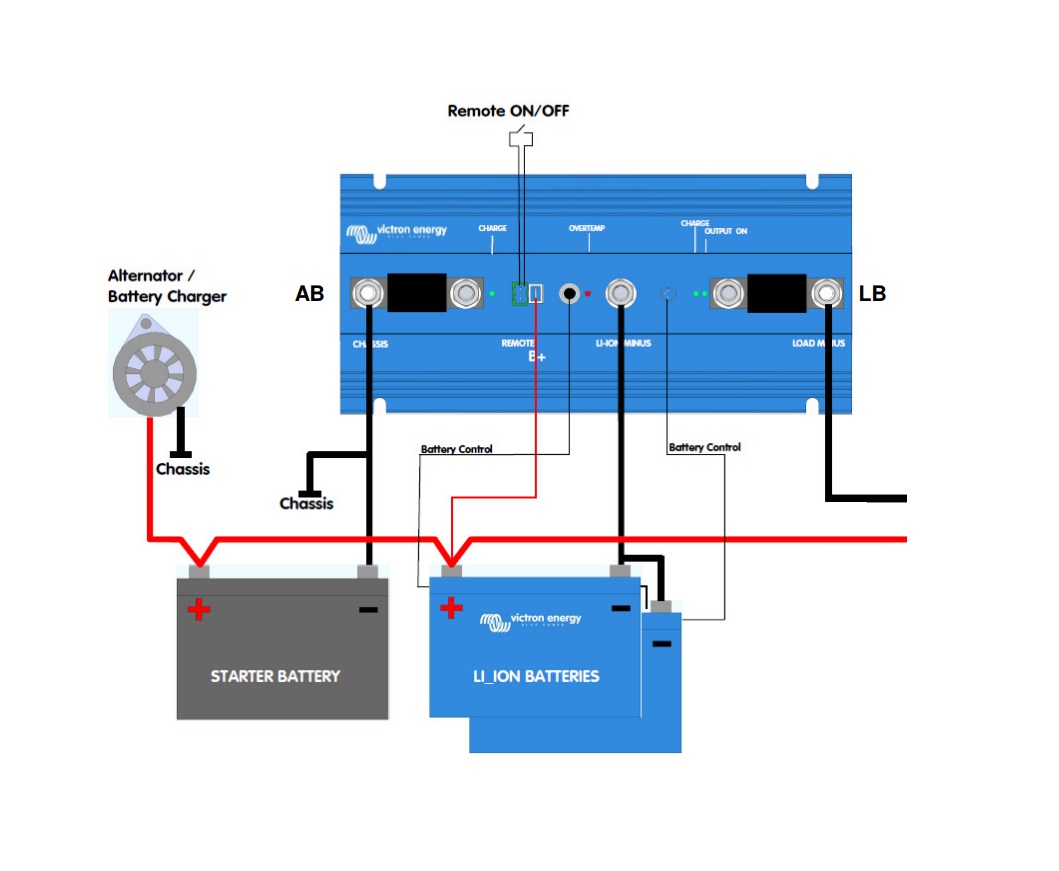 In this next diagram (above) the Victron 12/1200 BMS is used and this has a built-in way to limit the alternator to up to 100 Amps depending on what size fuse is placed in the left hand fuse holder. Note that the alternator always has a conventional battery to charge even when its output to the lithium battery is interrupted.

The Victron 12/1200 BMS has its limitations though so you might prefer to use the VE Bus BMS. Any system with a Multi-Plus or Quattro inverter charger is going to want to use the VE Bus BMS. The 12/1200 is really for smaller systems and has a limit of 100 Amps on the output side. In that case you can still use the VE Bus BMS as the BMS that is controlling the batteries but use the 12/1200 solely in its function as a current limiter. The wiring diagram would look like the one below. Again, as before, the alternator always has a backup battery to charge. 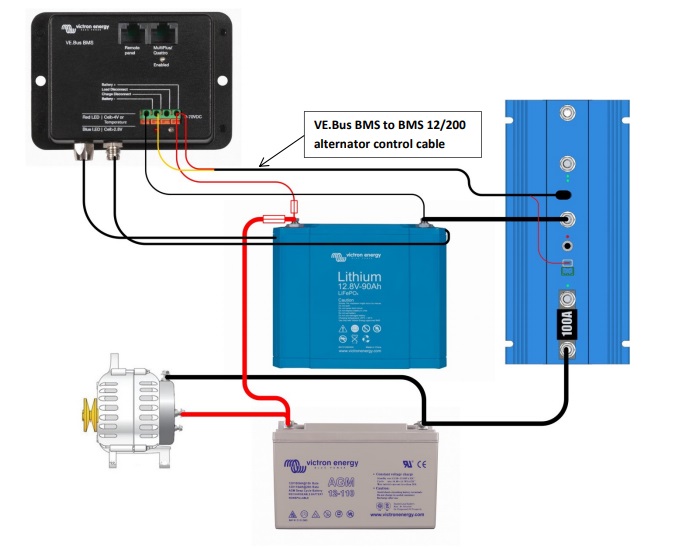 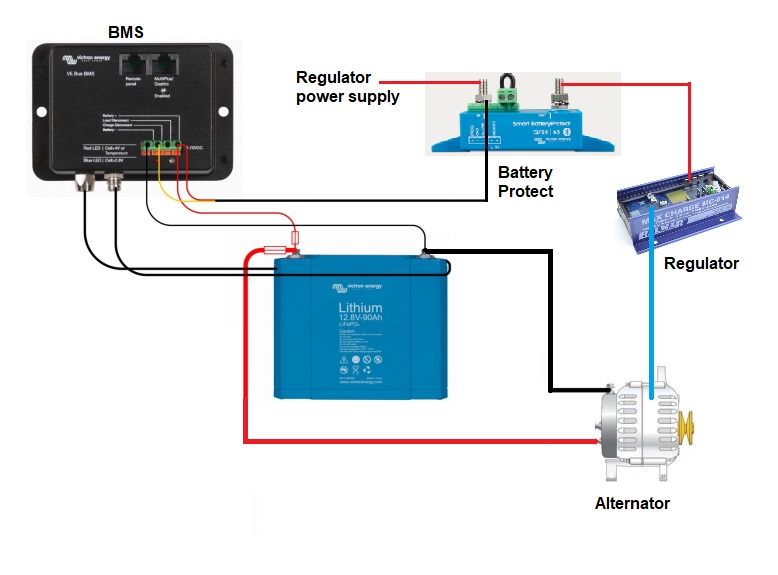 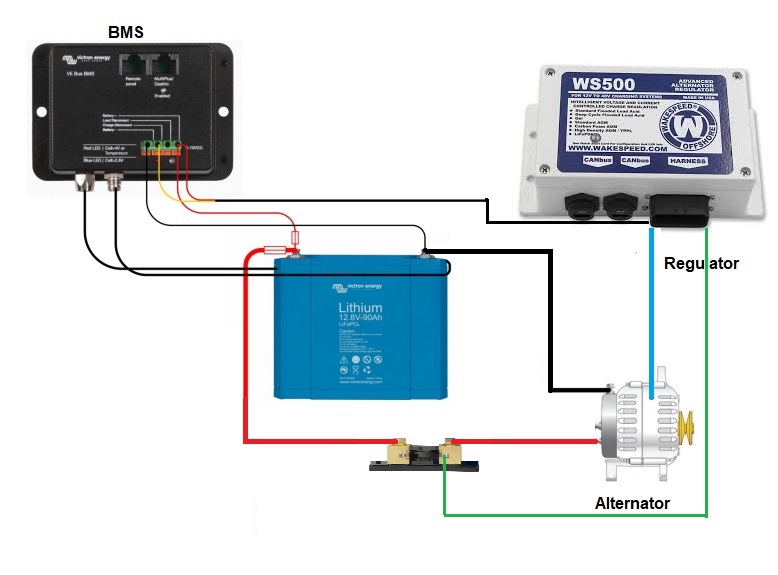 The last way shown below is the most hi tech (and the most expensive)  It was designed for use with the type of smart alternators and dynamos used on vehicles such as the Sprinter Van  and Euro Van where the output voltage can vary dramatically. To avoid interfering with the vehicles electronics, which might cause warranty issues, the buck boost converter can be programmed to use its built in vibration sensor to only operate when the engine is running. The output produced by the converter can be regulated to suit the requirements of the Lithium batteries it can prevent excessive load on the alternator by limiting how much charge is available for the Lithium battery.  This sophisticated device is a clever workaround to all kinds of difficult problems that can be encountered when making modifications to these vehicles. The wiring diagram looks like this: 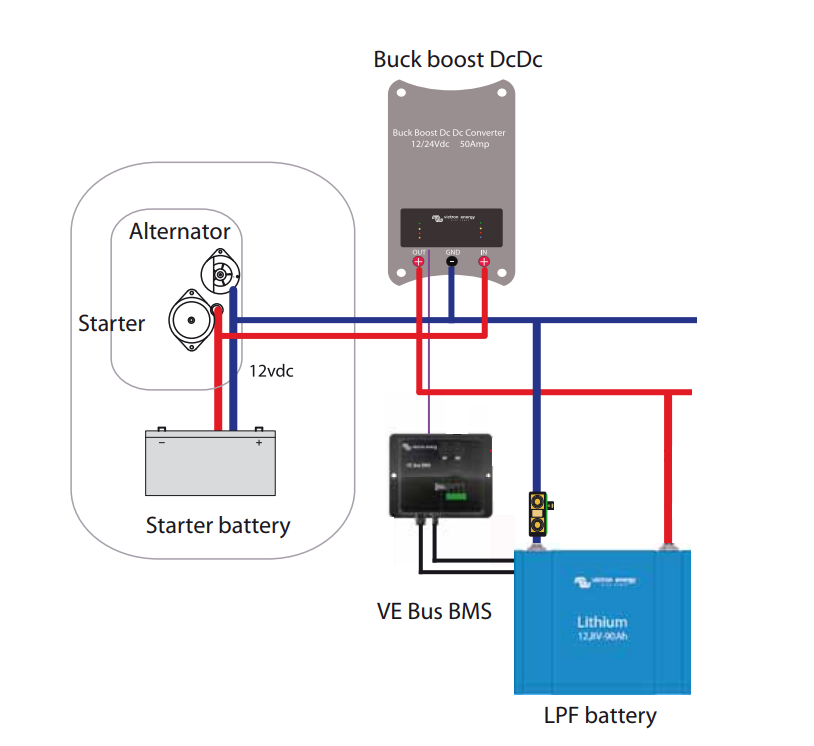 A note about these diagrams

The diagrams on this page are block diagrams to illustrate a concept.  They were all taken from published Victron Energy drawings available on the company website www.victronenergy.com  They were edited to remove extraneous information not relevant to the immediate topic in hand. In general they don’t show circuit protection, battery switches or other similar item’s.

If I did have a question about all these systems, what happens when the engine is stopped?  Does the lithium battery drain into the conventional battery?  Here is the official answer:  “The Cyrix-Li-ct will disconnect when the engine isn’t running and the starter voltage starts to drop much like the regular Cyrix. The BMS 12/200 blocks energy from flowing back to the starter battery altogether.”